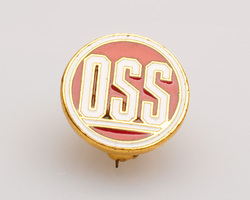 To discover their entry into the wonderful world of spy gadgetry and devices, we need to journey back to the department that would provide America with their own Q Branch.
Interestingly, one of the principle players at the start of the process was Ian Fleming. The end result of Fleming’s work during this period: What is now called the Central Intelligence Agency – acronymically known as The CIA.

Fleming was assistant to the Director of Naval Intelligence, Admiral John Godfrey. The most identifiable reference point would perhaps be Tanner, as Judy Dench’s M’s assistant in the recent James Bond films.
During the period that British Prime Minister Winston Churchill was attempting to persuade American President FD Roosevelt to join the allies war cause, secret ABCs were arranged.
The American British Conversations, to provide their proper title, were information and intelligence discussions.

The result of the ABCs was Godfrey’s despatch to Washington in 1941 to meet with Canadian, Bill Stephenson, the senior British Intelligence representative for the Western Hemisphere, and American, Colonel William ‘Wild Bill’ Donovan. Stephenson had been sent by the British Secret Service a year earlier to forge a relationship with J Edgar Hoover’s FBI. Donovan had previously been sent on fact finding and intelligence missions by Roosevelt during the war, and had got on well with Godfrey.
Fleming later wrote that the purpose of the meeting was to ‘set up a combined intelligence organisation on a 100 per cent co-operative basis.’

It was a bit messy in Britain, with the Ministry of Economic Warfare, The Secret Intelligence Service, the Political Warfare Executive and the Special Operations Executive, overlapping on various levels.
In the US, it was somewhat similar, but as they were not involved in the conflict, the urgency was not there at that stage. Indeed, Godfrey remarked at the time that he was surprised at how little co-operation existed between the US Army and US Navy.
Godfrey was invited to the White House to meet with the President. From his own experiences, he stressed the importance of having one person in charge of intelligence, rather than the three or four that existed.
On the same day, the President received a memorandum from Donovan, that stressed the need for ‘a central enemy intelligence organisation, not just for military, but economic and political benefit.’

On 18th June 1941, President Roosevelt appointed Donovan as Coordinator of Information (COI). The role was to ‘collect and analyse all information and date which may bear upon national security: To correlate such information and data and to make such information and date available to the President.’
Bill Stephenson sent a cable to Stewart Menzies, the Chief of the British Secret Service (BSS); ‘Donovan will be co-ordinator all forms of intelligence... He will hold rank of Major general and will be responsible only to the President... You can imagine how relieved I am after three months of battle and jockeying for position in Washington that our man is in a position of such importance to our efforts.’
William Donovan was the COI of the (Office of Strategic Services (OSS), which would later become the CIA.