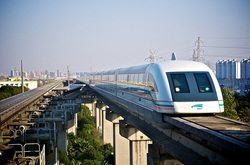 In 2004 the first high speed magnetic levitation (MagLev) train-line opened. The journey from Shanghai’s Pudong International Airport and the city takes around eight minutes to travel 30 kilometres. The fastest recorded speed is 501 kmh (311 mph).
However, this was not the first MagLev train to go into operation. The trip from Birmingham Airport and the train station in Great Britain has been via a MagLev shuttle since 1984.
The reason why further advancements have not been made, despite potential speeds of 1,000 miles per hour, is completely down to cost.
There have been many proposals for MagLev trains, including an Atlantic Ocean train, connecting America to Europe. The theoretical system could apparently accelerate for the first five minutes, cruise at full speed for seventy minutes, and decelerate for fifteen minutes. Each train could carry over 1,000 passengers. Energy costs will of course be negligible compared to air travel and it would be carbon neutral.
If that sounds like a great sales pitch, current estimates put the cost of MagLev at around $15m per mile. $51,000,000,000 is a lot of money to spend.
Again, the technology is there to make the world a better place, but the money isn’t and is not likely to be unless the costs of the technology are reduced substantially.

A 2009 New Scientist article included the variety of energy propulsion theories for ‘outer space’ flight and analysed the plausibility of each. They included:
Ion Thrusters: These are just a few years away.
Nuclear Pulse Propulsion: This is already possible, but the word ‘nuclear’ alone raises concerns.
Fusion Rockets: This also uses dodgy material, but is plausible, although a good few years away yet.
Solar Sails: Space age energy harnessing, but with associated weight problems. And as some of us know, as soon as you limit the amount of shoes that can be taken on holiday, alternative travel methods will be suggested.
Alcubierre Drive: This is the Star Trek Warp system, and it is apparently impossible...
...There are many other methods discussed in the article.
Article Link

The article also takes time to pour scorn upon fringe theories by German scientist Burkhard Heim, regarding hyperspace travel.
However, ever the optimists, we believe his ‘theories’ at least could become a ‘concept’ by the middle of the next decade. Heim believes that advances in quantum computing and artificial intelligence will mean that by the middle of the century, spacecraft could travel at faster-than-light speeds. Heim’s theory adds repulsive anti-gravity to Einstein’s space-time theory and generates the peculiar thrust required for hyperspace travel.
Article Link
So, if you want to go to Mars to visit Auntie Hilda (the name Hilda, will make a come-back), you would presumably go to an office, close down your body and rent a new one on Mars, which your memories and consciousness will be transported to.
Maybe teleportation will work, but it all sounds like people experimenting further with Playstations after Apple invent holographic gaming. Just saying.