Vegetarianism increases exponentially.
New arguments rage about laboratory grown, genetically modified meats and supplements, but as health properties and flavours improve, the public move further away from naturally born animal meats.
New medical therapies and treatments will see cures for obesity and body enhancements. The public becomes more health and body conscious, thus relieving pressure on overburdened health systems.
With Nanoparticles added to food to help the genetic modification process, the move to inclusion of Nanomaterials in food processing will progress to Nano-technologically developed foods with new and interesting flavours. 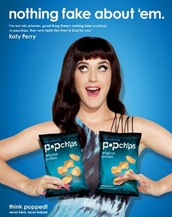 Using just one example...
The world’s favourite snack food, Potato Crisps (or Chips, as the Americans call them), are undergoing a bit of a health revolution. There are numerous companies providing healthier snacks with less additives. The switch to healthier oils and alternative styles of cooking has altered the industry dramatically in recent years.
Article Link

In 2008, the People for Ethical Treatment of Animals (PETA) offered a $1m prize to the first producers of in-vitro chicken. To win the prize is a near impossibility because of associated factors, but it won’t stop scientists trying.
Article Link

3D printing expert Janne Kyttanen has produced prototype printed pasta, breakfast cereal and burgers to demonstrate how advances in 3D printing could transform the way we eat.
The founder of design studio Freedom of Creation, said: "Food is the next frontier. We’re already printing in chocolate, so a lot of these things will be possible in the next few years."
Article Link

It’s in the genes, as they say. Nutrigenomics is the study of how a person’s genes interact with nutrition. As medical professionals become more aware of the related science, they will be able to prescribe diets that match an individual’s dietary requirements.

Researchers at the University of Wisconsin, have removed a gene called SCD-1 from mice. This process has enabled the mice to eat a high fat diet but not get fat. It is believed that advances in the research will not only lead to the elimination of obesity in humans, but as many cancers and premature death causing diseases such as heart disease and diabetes, relate to the same gene research, a by-product will also lead to further developments in their control and even, elimination.
Article Link

If Nutrigenomics is expected to lead to better health and management of disease, how will it progress?
The very fact that genetic testing already exists in the UK National Health Service, and desperately underfunded body for research purposes, would suggest that in the not too distant future, home test kits will be available. Nutritionists could well become the next are of therapy that will fill out phone books.
Article Link
While the most focussed research relates to healthcare, Nanomaterials are already being used in food packaging to improve shelf-life by reducing carbon dioxide leakage from fizzy drinks, or oxygen inflow and moisture outflow. Packaging Nanosensors will identify spoiled food. Manufacturers will not be able to sneak horse meat (UK health scare circa 2013) into your food, because the packaging Nanosensors will reveal all.

If that is now, what is next?

The US government alone will spend $1.8billion on research in 2013. This would suggest that not only is their great confidence in the potential of the research but we are on the cusp of many breakthroughs. Some sound a little futuristic, but when theories and concepts are in place, there is no stopping scientists. I won’t add, mwahaha, to that!
Humans currently extract the nutrients required from food by the digestive system. Within a decade expects expect that everybody could have detailed mapping of their nutritional requirements.
These could be provided by the afore-mentioned Nano-Replicator type devices, but also directly to the body via medical Nanorobots.
This will in turn leave food as an option, rather than a requirement. Stem cell and gene therapy research could allow humans to add an additional digestive system, for enjoyment purposes only, but that is rather fanciful at this stage.
What isn’t fanciful is the cost benefit element to governments. To attract investment and funding, they want something back. If healthcare costs alone, dwindle to negligibility, it would be well worth the UK government, for example, investing. They are unlikely to care too much about a few chefs going out of business. But then, what about the lost taxes from Tesco...