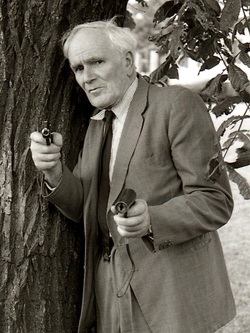 Desmond Llewelyn
Desmond Llewelyn was born in 1914 in South Wales. During his early school years he worked as a stage hand at school and picked up small theatrical parts. He flunked an eye test to become a policeman and then spent a week in a quiet meditation before deciding a future as a minister was not for him.
He was accepted to The Royal Academy for the Dramatic Arts in the 1930s, but the Second World War put a halt to his acting ambitions.
He was commissioned as a Second Lieutenant in the Royal Welsh Fusiliers.
In his autobiography, Llewelyn explained what happened to him while on operations in France during the winter of 1940. His company were holding off a division of German tanks, but, “eventually, the tanks broke through and many of us jumped into this canal and started swimming down it to the other side, figuring that our chaps were still over there. But the Germans were the only ones there."
Llewelyn spent the next five years of the War in POW camps, including Colditz. He was part of several failed escape attempts and would most certainly have come into contact with the sorts of escape devices that would become familiar to work in later life, as head of Q Branch!

Llewelyn returned to acting after the war and it is worth noting some of the roles he played during his career prior to landing the role of Q to get a handle on what he brought to the role of his lifetime.
Captain Sandeman (Campbell of Kilmhor) 1939, Customs Officer (Lavender Hill Mob) 1951, Schoolmaster (Valley of Song) 1953, King James II (Thunder in the West) 1957, Lord Bretherton (Queen’s Champion) 1958, Chief Yeoman (Further Up The Creek) 1958, Police Constable (Sapphire) 1959, Detective Sergeant (HG Wells’ Invisible Man) 1959, Police Constable Jones (Private Investigator) 1959, Sgt. Harris (Saturday Playhouse) 1960, Colonel Tregaron (The House Under The Water) 1961, Senator (Cleopatra) 1963.
The theme is clear. Llewelyn, at 6’ 2” provided an authoritative presence. Even after playing the role of Q he also played a Doctor, a Bank Manager, a Count, and a Headmaster during the 1960s.

As Ian Fleming played no part in the creation of the character Q, it was left to Llewelyn to invent his character’s own life and history. With a nod towards his own education, Q was educated at Radley, and Llewelyn proudly wore the school tie in more than one Bond film.
Q apparently excelled at sports and after leaving Radley he went to Trinity College, Cambridge (another tie). Q played cricket for the MCC (the famous egg and bacon tie), rugby for Newport and he became an honorary member of the Fire Service College at Moreton in the Marsh, in the Cotswolds.
It wasn’t just the ties; wardrobe played a big part in Q’s role as Bond’s gadget master. Perhaps the classic picture would be Q with Little Nellie and Bond in You Only Live Twice.
The baggy army surplus shorts (desert storm circa 1944!), and barely concealed frustration with the petulant teenager that he clearly considered Bond to be leads us to a quote from Llewelyn himself, from an interview later in life, “Yes, I know 'Q' is beloved. But, for God's sake, don't make him some kind of sentimental grandfather. That's what I am in real life.”
Well, Desmond, I am afraid there is little to be done about that.
On adopt a Grandfather day... The little girls might seek out Father Christmas, but I am pretty sure all the little boys will be forming an orderly Q behind Desmond Llewelyn.

Llewelyn’s back story to his character certainly represented what put the ‘Great’ in Britain for many, but it was Llewelyn himself, whose own character came out so strongly towards the end of his career, that pulled at the heart strings.
On the surface it may have appeared all about the comic asides that became so familiar with the character as he grew older and more grumpy, but the chemistry he shared with Pierce Brosnan bordered on touching.
Q’s departure in The World is Not Enough, shortly before Llewelyn’s sad death in a car accident, was a double hankie moment for more than a few Bond movie fans.
Interestingly, Brosnan became a Grandfather at 44, during the filming of Tomorrow Never Dies.
Perhaps even James Bond considered Q the perfect Grandfather role model.

James Bonds come and go. All have brought something to the role. Most have their favourites.
There will however, only ever be one Q