Futurology: What? Why? When?

We are all Futurologists 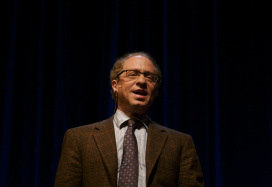 If you are an avid Soap Opera viewer, you will be familiar with the characters, their fictional lives and times, and the plot lines they regularly feature in. It's not Agatha Christie's Miss Marple, it's not Leo Tolstoy's War and Peace. If you think of a character from the show, consider what has gone before, think about their current storyline - you know what's going to happen next, don't you?
Using existing data, Futurology, or Future Studies, as it is also known, extrapolates the possible and the probable, merges it with advances in other fields, and postulates the future.
It would be considered a science for you and I to work out what will happen with mobile phones or computers in the next few years, but there are extremely respected people, such as Ray Kurzweil (pictured) and Michio Kaku, that use scientific algorithms, historical data, knowledge and contacts in the science, military and technology fields, that are able to extrapolate that information to create a vision of the world's future.