Try The Other Q

Just as Terence Young created Sean Connery's Bond, Desmond Llewelyn created Major Boothroyd, or Q as has become more familiarly known.
The problem the other actors have had following in Connery's footsteps have been characterization and style. No actor wants to be compared with another that has played the same role for fear of an inferior comparison - hence, why the different styles have been presented to us.
None more different than Roger Moore's version to Sean Connery's.
There will always be familiar traits, such as the style and demeanour of any James Bond actor. Indeed, the Daniel Craig version has clearly been a design rather than a creation: Bond now has certain aspects to his character that we will surely see in all future 007s.
In the same vein, no Q will want to be compared to Desmond Llewelyn's Quartermaster.
Although similarly, there will be certain traits that will remain with the character. Ironic really, because while Desmond Llewelyn presented a technological genius to us on screen, he  was a self confessed technophobe.
In the technological age we live in now, all future Quartermasters are likely to be similar whizz's.

To clear something up - although Peter Burton played Major Bothroyd in Dr No, the first James Bond movie, he was not playing Q.
He was clearly called the "Armourer" and Ian Fleming made that fact clear in the book of the same title.
Burton's role was a thank you by Fleming to Geoffrey Boothroyd, about whom you can read more HERE.
Interestingly, when Major Amasova called Q, "Major Boothroyd" in The Spy Who Loved Me, she changed the game - The Armourer was called Major Boothroyd, but Fleming did not have a name for the representative of Q Branch that gave Bond his gadgets.
So, although Peter Burton will forever exist on lists of Qs - he was not Q, and was not even playing Q. 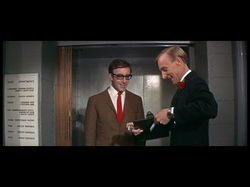 For children of the 1960s and 1970s, Geoffrey Bayldon will always be best remembered for his role as Catweazle.
Yes, Catweazle.
As an actor, his versatility was never better displayed than in his turn as Q in the second version of Casino Royale.
It was clearly a spoof movie and it was clearly a tongue in cheek performance, but what Bayldon managed to do in his short screen time, was out Bond, Bond. While Peter Sellers was bumbling around Q Branch in a tweedy jacket, Bayldon's Q is smart, suave and sophisticated, and perhaps even insouciantly louche.

Sean Connery was back for Never Say Never Again, and he really went for it. Perhaps playing up Kevin McClory's claims to the story and the background of Q, for the first time Q gets a first name, and even a nickname.
Bond calls Q, "Algernon" and "Algy" in his visit to Q Branch.
Perhaps as a state of the nation style commentary, McGowan plays a beleaguered and severely budgetary restricted Q. He is in a cold and windy Q Branch, wearing a scarf and a fairly scruffy suit. "Good to see you, Mr Bond. Things have been awfully dull round here. Bureaucrats running the old place, everything done by the book. Can't make a decision unless the computer gives you the go-ahead. Now you're on this, I hope we're going to have some gratuitous sex and violence."
In some respects this was probably a fair representation of a probable Q Branch of that time. McGowan's characterization was a fairly blunt commentary on the decreasing role the British Secret Service would have been playing on the world stage at that stage.
The CIA were streets ahead in development and finances, as were the KGB - Q simply couldn't be at the cutting edge of gadget development. He even equipped Bond with second hand gadgets!

When John Cleese first entered the Bond movie franchise, it was as a clumsily monikered "R" in The World Is Not Enough. He was actually Q's assistant, understudy or second in command at Q Branch. It is not made entirely clear.
It appeared that he was written in to take over from Desmond Llewelyn, but the writers and director may not have had the heart to tell Desmond that he should have retired off-screen. Thoroughly fair of course, as we have revealed, Desmond Llewelyn was almost single handedly responsible for not only the existence of the character but its longevity.
After Desmond Llewelyn's sad death between films, Cleese took the reins for Die Another Day.
A difficult challenge for any actor, but he honoured the memory of Llewelyn by playing a very similar character. The only real difference would possibly be an even less respectful relationship with 007. Plus of course, we had one of Britain's most respected comic actors playing the role, which left viewers wondering two things: Who is the star? And, when is he going to bring out the dead parrot? 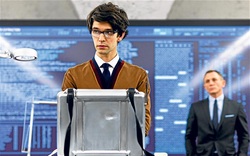 And so on to the re-boot...
Q no longer exists.
In his role as Q, Ben Whishaw's prime objective is not to supply James Bond with "An explosive pen" it is to run computer operations and associated equipment.
Hopefully, the film-makers will have a re-think on the character and develop him into what the viewers actually want, rather than what they think they should have, as a Quartermaster for the modern age.
Apologies for anyone that enjoyed the Skyfall version of Q, but part of the success of the franchise is that viewers have actually enjoyed the exploding pens.