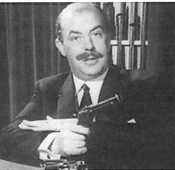 Geoffrey Boothroyd
In 1956 Ian Fleming received a politely critical letter from a firearms hobbyist and expert named Geoffrey Boothroyd.
It was Mr Boothroyd’s assertion that after reading Casino Royale, James Bond was equipped with an inferior firearm to that which would suit the world’s foremost spy.

Mr Boothroyd carried out an interview with the BBC in 1964 – it was aired on the same day that the third Bond movie instalment, Goldfinger, premiered in London.
He explains his correspondence with Fleming, “I said; I didn’t think Bond was going to last very long if he used a .25 Beretta pistol, which is a ladies’ gun, and not a very nice lady at that, and used his chamois leather holster.
“I have a preference for a revolver, for the type of work secret agents, private eyes and the type of work they might be called upon to do.”
Boothroyd continued with a fascinating opinion piece on small firearms, before adding, “One of the reasons I prefer the revolver is because of the instant availability, without having to fiddle about with safety catches or anything else.”
Boothroyd also believed a holster should be of stout material as Bond’s chamois leather version would not prevent the projections of the weapon showing through his nicely tailored suit, which was presumably Fleming’s intention: “A soft holster is liable to snag on the gun and could get caught on any of the sharp projections.”
When discussing holsters, Boothroyd continues to add, “I prefer the belt holster.” The BBC interview continued with a demonstration. This may have been a little cowboys and Indians for Fleming’s suave creation, but whatever, Bond’s shoulder holster was maintained. Interestingly, the quick draw benefits of the belt holster have been a factor in the continued preference by police forces around the world.
Boothroyd went on to explain that after their discussions, Fleming’s decision to use the Walther PPK was a “compromise” because he, “definitely preferred automatics to revolvers.” Although Boothroyd did describe it as, “A good compromise because it gives you a very rapid first shot. And that’s the one that counts.”
Here is a transcript of Ian Fleming’s reply to Geoffrey Boothroyd’s original letter.

I really am most grateful for your splendid letter of May 23rd.
You have entirely convinced me and I propose, perhaps not in the next volume of James Bond's memoirs but, in the subsequent one, to change his weapons in accordance with your instructions.
Since I am not in the habit of stealing another man's expertise, I shall ask you in due course to accept remuneration for your most valuable technical aid.
Incidentally, can you suggest where I can see a .38 Airweight in London. Who would have one?
As a matter of interest, how do you come to know so much about these things? I was delighted with the photographs and greatly impressed by them. If ever there is talk of making films of some of James Bond's stories in due course, I shall suggest to the company concerned that they might like to consult you on some technical aspects. But they may not take my advice, so please do not set too much store by this suggestion.
From the style of your writing it occurs to me that you may have written books or articles on these subjects. Is that so?
Bond has always admitted to me that the .25 Beretta was not a stopping gun, and he places much more reliance on his accuracy with it than in any particular qualities of the gun itself. As you know, one gets used to a gun and it may take some time for him to settle down with the Smith and Wesson. But I think M. should advise him to make a change; as also in the case of the .357 Magnum.
He also agrees to give a fair trial to the Bern Martin holster, but he is inclined to favour something a little more casual and less bulky. The well-worn chamois leather pouch under his left arm has become almost a part of his clothes and he will be loath to make a change though, here again, M. may intervene.
At the present moment Bond is particularly anxious for expertise on the weapons likely to be carried by Russian agents and I wonder if you have any information on this.
As Bond's biographer I am most anxious to see that he lives as long as possible and I shall be most grateful for any further technical advices you might like me to pass on to him.
Again, with very sincere thanks for your extremely helpful and workmanlike letter.

G. Boothroyd, Esq.,
17, Regent Park Square,
Glasgow, S
It has been argued that it was the author’s discussions with Geoffrey Boothroyd that persuaded him of the potential of introducing a character to represent Q Branch, but it is not one we would necessarily subscribe to.
It is true that he expresses his gratitude to Boothroyd by penning an extra chapter in Dr No, the sixth Bond novel.
“Major Boothroyd, the headquarters’ Armourer, entered into M’s office to join Bond and M. Bond was told that his .25 Beretta and holster were being replaced by a Walther PPK 7.65 mm with a Berns Martin Triple-draw holster, and a Smith & Wesson Centennial Airweight .38 calibre revolver.  Bond was not pleased to have to relinquish his .25 Beretta but orders were orders.”
However, as the character was not developed for further books, we are left to presume that Fleming did not have a position for Q as a literary character.

So, if Boothroyd was not Q, what were Fleming's influences and who was he?