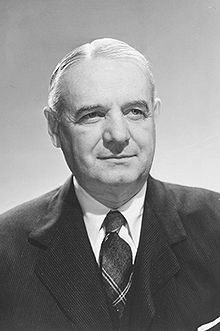 William ‘Wild Bill’ Donovan’s key role after appointed as Coordinator of Information by President Roosevelt, was to collect and analyse all information that could impinge upon American national security in the lead up to US entry to the Second World War.
Donovan was an impressive military figure. By the end of his life in 1959, he had become the only person to have received the four highest honours that the US awards: The Medal of Honor, the Distinguished Service Cross, the Distinguished Service Medal ( x 3) and the National Security Medal. His duties in the First World War had seen him awarded the Silver Star and a Purple Heart (x 2). He also received an honorary knighthood from the British government and the National Order of the Legion of Honour by France.

He therefore unsurprisingly commanded sufficient respect to manage the tricky task of organising otherwise fragmented intelligence bodies.
He spent around a year battling with these departments, all of whom had their own interests and reluctance to relinquish authority of power, but he was able to form the Office of Strategic Services in 1942. The OSS was compiled of five sections: Secret Intelligence (SI) Branch, Research and Analysis (R&A) Branch, Special Operations (SO) Branch, Morale Operations (MO) Branch and X-2 Branch.
The OSS would carry out successful espionage and sabotage operations in Europe and Asia, but because of FBI director J Edgar Hoover’s hostility towards Donovan, and Douglas MacArthur’s power, the OSS were kept away from South American and Phillipino operations.
Donovan’s OSS would also come under pressure by Hoover’s ambitions for the FBI, post-war and new President Harry S Truman was said to have disliked Donovan, and the Department of War took over the Secret Intelligence (SI) and Counter Espionage (X2) branches, and the Department of State took on the Research and Analysis Branch of the OSS. It was renamed the Research and Intelligence Service and then renamed again; the Bureau of Intelligence and Research.

In early 1946, President Truman created the Central Intelligence Group (CIG), before the National Security Act of 1947 saw the establishment of the Central Intelligence Agency (CIA), which took on the functions of the OSS.
The time-line of the CIA is not however our prime interest. The Special Operations and Secret Intelligence Branches would not have been able to equip their agents without the technical abilities of the staff of the Research & Development Branch (R&D).

‘Wild Bill’ Donovan’s head of this Q Branch was Bostonian chemist Stanley P. Lovell, who he describes as his “Professor Moriarty”. Another quote attributed to Donovan, “I need every subtle device and every underhanded trick to use against the Germans and the Japanese ... You will have to invent all of them, Lovell, because you’re going to be my man."

And what a Q, Lovell would prove to be...