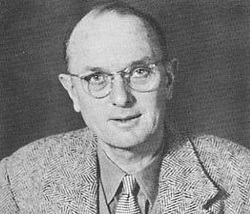 Ian Fleming did not have a character called Q in his books. James Bond’s gadgets and devices were supplied by Q Branch. It can only be presumed that the reason for this was because Fleming had so many people to choose from when gathering influence and inspiration for Q.
A contemporary of Charles Fraser Smith was Christopher Clayton Hutton, whose war time work was mostly as an Intelligence Officer for Mi9.

A First World War pilot, Clayton Hutton’s interest in magicians and escapologists would form the basis for his inspiration, research and development of escape and evasion equipment and aids during the Second World War.
In 1942 Clayton Hutton published a top secret manual called Per Ardua Libertas (Liberty Through Adversity), which detailed examples of the escape and evasion maps along with gadgets and devices that had been produced up until that time.
The publication helped bring American Intelligence officers up to speed after they belatedly joined the conflict.

Some of the equipment developed by Clayton Hutton included, cloth maps, which would often be sewn into clothing, compasses so small they could be secreted onto the back of a button, blankets with clothing patterns detailed upon them, which would be cut and sewn together by POWs.
Escape kits were designed in cigarette tins and even Monopoly Boards – where the map would be laminated as the board and coded escape instructions would be included using cunningly deployed full stops and punctuation – it is even said gold ‘pieces’ and German banknotes were included to aid escape.
Part of Clayton Hutton’s role was to work with charities and bogus charities, who were allowed to supply POWs with games and blankets etc., as part of the Geneva Convention Agreement.
Card games would help stave the boredom of Prisoners but not nearly as much as the maps hidden away inside the packets!