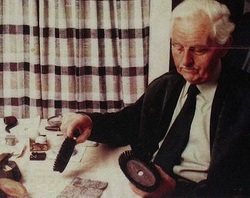 Fraser Smith’s background was an interesting one. The son of a solicitor, he was orphaned at seven, before being brought up by Christian missionaries in Hertfordshire. He was schooled at Brighton College, where it was said he was, “Scholastically useless, except for woodwork, science and making things.”
After undertaking a variety of early career jobs he went to Morocco as a Christian missionary. On his return he was discussing Bricolage, the art of making things from useful but random objects, during a sermon at the Open Brethren Evangelical Church in Leeds. Two officials from the Ministry of Supply were in attendance. They would change Fraser Smith’s life, provide Ian Fleming with the key influence to the character of Q, and provide us with the inspiration for this website.

Fraser Smith was appointed as a temporary civil servant to the Ministry of Supply’s Clothing and Textile Department. Well, that was the cover he used convincingly enough to fool both his boss and his secretary.
What he actually did, was develop and supply gadgets and devices to the Special Operations Executive, not from his office near St James’s Park, but from the nearby Minimax House, under the instruction of Mi6.
His talents were such that for an order of Spanish Army uniforms - which were used to infiltrate agents into the neutral Spanish Army to prevent their entering the war on the side of the Axis powers – he managed to deal with over 300 suppliers, all of whom made part of the uniform, none of which knowing why, or what the textiles were for.

Aside from Textiles, Fraser Smith’s enthusiasm for gadgetry saw him develop shaving brushes containing film, cameras concealed into mundane items such as cigarette lighters, hairbrushes that included escape equipment such as a saw and a map, steel garrotte wire bootlaces and many more items.
He developed products and devices that are still included in equipment today, such as the compressed gas canister to inflate life jackets.
Although much of his work was to exact specification for the war effort, the devices and equipment he developed that were his own idea he described as “Q Devices” after the First World War warships that were disguised as freighters and commonly known as Q Ships.

Fraser Smith worked on a variety of projects with Ian Fleming, including Operation Mincemeat.
It is not hard to see where Fleming gained inspiration for Q Branch and James Bond’s gadgetry.