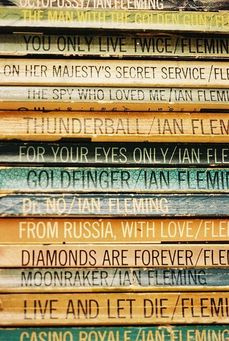 Ian Fleming was not directly responsible for the character Q.
The author clearly refers to “Q” in his novels, but the abbreviation was for the spy’s version of a supplies cupboard – Q Branch. A former intelligence colleague, Charles Fraser Smith, was known for his Q Devices (about which you can read more HERE), and although a navy man, Fleming’s reference may even hint at the army equivalent of the Quartermaster’s Store - it is certainly a nod towards the work of the Ministry of Supply during the Second World War.
Q Branch would supply equipment and gadgets, and the back office type assistance required to make 007’s job of nailing the super baddies easier.

Book 1 – Casino Royale
In the third chapter Fleming’s first James Bond novel, M says to 007, “Go over a few days before the big game starts and get your hand in. Have a talk to Q. about rooms and trains, and any equipment you want.”

Book 2 - Live and Let Die
During a discussion between Bond and M regarding skin grafts, we read, “”Q” will put you on to the best man and fix a date.” Later in the book is a more extensive reference, “He tried on the thin black frogman’s suit [on loan from the Admiralty] that covered him from the skull-tight helmet with the Perspex window to the long black flippers over his feet. It fitted like a glove and Bond blessed the efficiency of M’s ‘Q’ branch.”

Book 4 - Diamonds are Forever
In preparation for a trip to the USA, “...Q Branch would fix all that.” In the next chapter, “...his tickets and passport into a small attaché case, also of battered pig-skin. This had been prepared for him by Q Branch and there was a narrow compartment under the leather at the back which contained a silencer for his gun and thirty round of .25 ammunition.”

Book 5 – From Russia With Love
In chapter 13, “Q Branch had put together this smart looking bag, ripping out the careful handiwork of Swaine and Adeney to pack fifty rounds of .25 ammunition in two flat rows, between the leather and the lining of the spine. In each of the innocent sides there was a throwing knife, built by Wilkinsons, the sword makers, and the tops of their flat handles were concealed cleverly by stitching at the corners. Despite Bond’s efforts to laugh them out of it, Q’s craftsmen had insisted on building a hidden compartment into the handle of the case, which, by pressure at a certain point, would deliver a cyanide death pill into the palm of his hand. (Directly he had taken delivery of the case, Bond had washed this pill down the lavatory.) More important was the thick tube of Palmolive shaving cream in the otherwise guileless spongebag. The whole top of this unscrewed to reveal the silencer for the Beretta, packed in cotton wool. In case hard cash was needed, the lid of the attaché case contained fifty gold sovereigns. These could be poured out by slipping sideways one ridge of the welting.”
In Chapter 16, “Now Q Branch in London is trying to fix some way of wiring the damn thing for sound.” And later in the chapter, “Unless Q Branch can think up something very clever, I shall have to be content with keeping an eye on them.” And later in the book, “...when Q Branch had demonstrated the catch that held them.”

Book 7 – Goldfinger
In chapter five of Goldfinger: “Bond out down the receiver. He picked up the green receiver and dialled Q Branch and talked to the section duty officer. It would be all right. There was a B.O.A.C. Britannia leaving in the morning. Q Branch would see that the crate caught the plane.”

Book 11 - On Her Majesty’s Secret Service
“He glanced at the new Rolex on his wrist – the shops were still shut and he had had to blarney it out of Q Branch.”

Book 13 - The Man With The Golden Gun
[Mary Goodnight]: “The buttons are down the back. This is standard uniform for a tropical station.”
[Bond]: “I can just see Q Branch dreaming it up. I suppose one of the pearls has a death pill in it.”
[Goodnight]: “Of course, but I can’t remember which. I’ll just have to swallow the whole string. Can I have a daiquiri, please, instead?”

It is clear that Fleming felt he had little use for a “Q” in his novels, and the only practical assistance Bond needed to save the world was a few technically minded office equipment staff.

However, just because the author did not pen him as a character, it does not mean he did not exist...