Not Just The Quartermaster 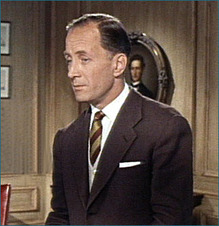 Peter Burton playing The Armourer
The role of the ‘Armourer’ is played by Peter Burton in Dr No. The scene is a fairly faithful translation from the book.
Q Branch’s involvement had a bigger impact in the novel; From Russia With Love, where they provide Bond with a briefcase full of trickery and wonder.
In the film, the second in the franchise, the briefcase is given to Bond by Desmond Llewelyn (Burton couldn’t make the movie because of scheduling issues), who is clearly representing Q Branch. The character is credited at the end of the movie as, Major Boothroyd.
The director, Terence Young, has been credited with turning Sean Connery into James Bond. The affectations, the style, the iconic traits; they all owe a debt of gratitude to Young’s part in the elevation of Ian Fleming’s character into a silver screen legend. It was Young’s personal style, wit and charm that was the model upon which Connery would develop the character.
However, it is also claimed that Young stepped down after From Russia With Love because he felt he had taken the character as far as he could. Producers, Harry Saltzman and Cubby Broccoli also refused to give him a share of the take of Goldfinger, despite early work having been completed. He returned for Thunderball, but after that he said he would only do a Bond movie again if it was the last one.

Guy Hamilton took the reins for the third movie instalment, Goldfinger. And although Q fails to make the opening credits, it was in this movie that he was born.
It is claimed that Hamilton asked Desmond Llewelyn to play the character as a grumpy, short tempered and impatient man.
Richard Maibaum, who would go on to write the first thirteen Bond film scripts, worked with Oscar winning writer Paul Dehn on the movie.

It is the first time Bond visits Q Branch in books or films, and this is the first exchange he shares with the character played by Llewelyn:
Bond: “Morning Q.”
Q: “Morning 007...”
This is the first reference to the character that is clearly the head of the department. But it was what came later in the exchanges that begins the story of one of the greatest movie characters of all time...
After showing Bond the gadgets and gizmos that will be used in the movie, including the Aston Martin DB5, which is a leading character in the movie itself:
Q: “Now this one I'm particularly keen about. You see the gear lever here? Now, if you take the top off, you will find a little red button. Whatever you do, don't touch it.”
Bond: “And why not?”
Q: “Because you will release this section of the roof, and engage and then fire the passenger ejector seat. Whoosh.”
Bond: “Ejector seat? You're joking.”
Q: “I never joke about my work, 007.”

The whole scene lasts less than three minutes, but it would go on to define an aspect of Fleming’s creation that no-one to that point, had realised was so important.
Now, when people think of spies and James Bond, they think of the gadgets [okay, and the girls].

Between them, Hamilton, Maibaum and Dehn, to varying degrees of involvement, had developed a character that would go on to feature in countless movies throughout history, from Hillary in Lara Croft: Tomb Raider, to Lucius Fox in Batman Begins. It seems that movie-makers world-wide will no longer allow you a super hero or villain fighter without a gadget master to help them along their way.
But just as Terence Young breathed life into James Bond as a character, one man is truly responsible for the creation of Q...