If Bond is introduced with a gadget, why shouldn’t the baddie be introduced with a gadget?
Adolfo Celi, as Emilio Largo enters Ernst Stavro Blofeld’s secret control room (that is TARDIS like in nature – far bigger on the inside than it could possibly be in the confined Parisian streets) at The International Brotherhood for Assistance of Stateless Persons, he whips out a little remote control box and enters via automatic sliding doors.

When Lew Hewitt and Dee Horton saw that the campus winds were preventing Corpus Christi’s swing doors from working properly in 1954, they set about developing an automatic sliding door that would overcome the issue. Horton Automatics was founded and in 1960 they began installing them commercially.
Blofeld’s ‘Lair’ was given an immediate ‘state of the art’ aura with this single contributory device.

The Automatic Doors People claim they sell to Shops, Colleges, Councils, Banks, Hotels, Hospitals, Schools, Airports and more. They are obviously very expensive, but wouldn't it be nice to be the first among your friends to have them at home. They may even be able to incorporate a "zhzhzhzh" noise as seen in Star Trek! 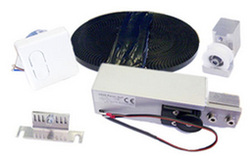 A Domestic System for Automatic Sliding Doors may sound like a simple development and it does seem rather strange that of all the Jetson style innovations, this isn't one that hasn't taken off.
It could be price; this version from SDS London is £795, but that is unlikely - people seem to spend far more on home renovation projects and on all manner of things, as you can see HERE
A toothed belt and carrier drives the sliding functions. It is a simple method and can be used with wardrobes, windows, patios or gates.
Photo: Thunderball 1965 Danjaq, LLC, & United Artists Corporation. All rights reserved
​