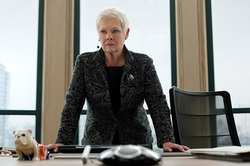 We get our first glimpse of the Royal Doulton British Bulldog on M’s desk, as the scene drifts away from her writing James Bond’s obituary.
Skyfall is full of allegorical references and the bulldog is all about symbolism. Mi6, 007, death, what puts the Great in Great Britain – that sort of thing.

We next get to see the wonderful ceramic in M’s temporary office, below the streets of London, in Churchill’s former war time bunker. The association is notable, but Bond isn’t a fan, “The whole office goes up in smoke and that bloody thing survives.”
M replies, “Your interior decorating tips have always been appreciated 007.”
It’s the only fixture in the gloomy office that features any colour.
It clearly represents M, and what M represents. M does what is needed, whatever the cost.
The bulldog spirit lives on, whatever adversity throws at it.

It also makes a re-appearance later in the film.
Photo: Skyfall 2012 Sony Pictures. All rights reserved