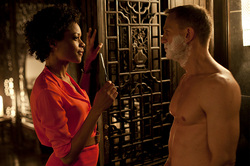 We have really enjoyed 007’s seduction devices throughout the franchise’s history, perhaps none more so than the Fortnum & Mason picnic basket of Never Say Never Again (LINK), but the wordplay between Naomie Harris character (SPOILER – we don’t know she will become Moneypenny yet, although learned viewers have their suspicions), and Commander Bond, is a treat.
However, the seduction attempt fails. A landmark moment in James Bond history, surely.
With towel wrapped at the waist and battle scars visible (we’re sure they move throughout the movie), Bond is shaving in a bathroom that does not have a door.

Moneypenny: “A cut-throat razor. How very traditional.”
007: “Well I like to do some things the old fashioned way.”
Moneypenny: “Sometimes the old ways are the best.”
Bond offers up the razor...
Moneypenny: “Are you putting your life in my hands again?”

The scene cuts away while James washes off his shaving cream, lighting some candles on the hotel balcony and moving one of those heavy hotel room chairs outside, before presumably re-applying shaving cream so that Moneypenny can kneel between his be-towelled legs to have a go at shaving.

A sneaky James unbuttons the top of Moneypenny’s blouse only to be told; “Keep still, this is the tricky part.”
The blade slides up his throat in a scene reminiscent of Barbara Cartland’s imagination; “That’s better, you look the part now.”
007: “And what part’s that?”
Moneypenny: “Old dog, new tricks.”