"How did he die?"
"Your contact? Not well."
"If M was so sure I was bent, she'd have sent a Double-O. The benefits of being section chief - I know of everyone being promoted to Double-O status. You file shows no kills, and it takes..."
"Two."
That opening exchange left the viewers in no doubt about what type of James Bond, Daniel Craig would be.
A very violent film noire flashback scene is then shows. It takes place in a public bathroom and the fight ends in James' first kill. And the device used.
A sink.
James drowns the would be assailant under the running tap of a filling public bathroom sink, and by then, everyone watching is on the edge of their seat. It was dramatic stuff, and an incredible opening to the film.
Now, a common and garden variety of sink would not ordinarily merit a mention, but this episode of the franchise was a re-boot - This was the first time James Bond had ever killed anyone. Viewers were stunned - it was not a Beretta, it was not a Walther, it was not even a garotte wire - it was a sink.

The reality of the section chief's predicament quickly dawns on him, James Bond was just about to become - 007.
And then, the dramatic twist. The 'Contact' was not dead. He rise. He lifts his gun.
Bond turns, fires his gun, and the pose - yes, the famous one.

There have been dramatic beginnings to Bond films, and some incredible stunts, but this, without question, was stunning. They say the opening of a film can draw the audience in - few, in the history of cinema, could match this. 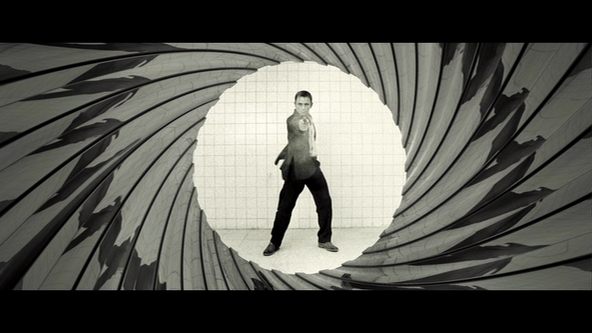